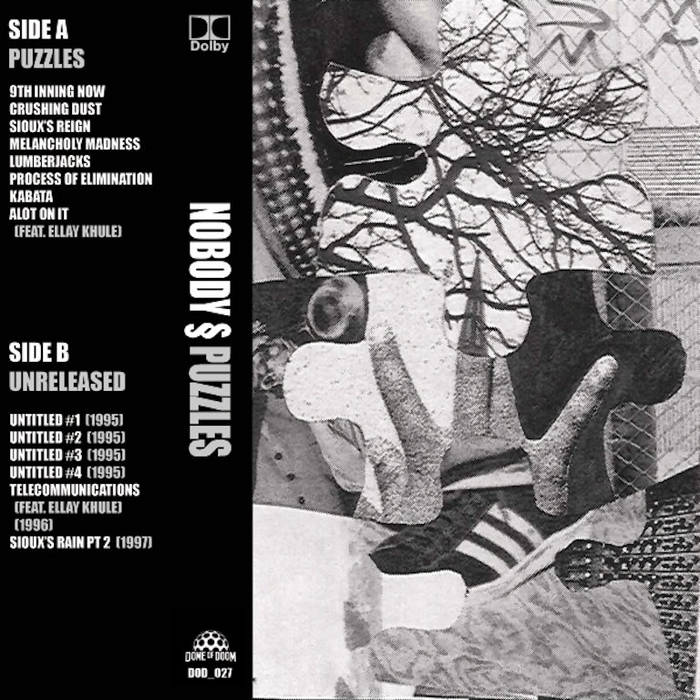 This is a limited edition reissue of the first beat tape I ever released myself, way back in 1996, which was limited to 100 copies. I tracked the beats from my Roland DJ-70 straight to DAT at DJ Hive's Treetop studios in San Pedro. I then made a CD of the DAT and ran the copies myself. This edition is straight from the master CD. The Untitled tracks are from a beat tape I gave to RAW aka 6Blocc way back in the summer of 1995. All done on a sequencer without quantizing. Both Ellay Khule songs are from 1996 and are my first vocal collaborations. Sioux's Reign Pt. 2 is from 1997 and comes from the DAT for the original follow up to Puzzles, which eventually became Soulmates.

All beats by Nobody (E. Estela) for Nobody's Home Productions. Additional vocals and lyrics on 8 and 13 by Rifleman Ellay Khule. 1-8 recorded at The Tree House with DJ Hive. 9-12 found and digitized by Raoul Gonzalez. 13-14 recorded in my old bedroom at my parents house.

Bandcamp Daily  your guide to the world of Bandcamp

New sounds from Mavi, Ivy Sole & Moderator, plus AJ, the One joins the show, for her latest release